“She is my goods, my chattels”: Hats, Marriage, and Possession

Mrs. Lovett of Troy, New York, needed supplies for her job making hats. Working from home, she had a millinery business “in her own name.” Though Troy, located at the eastern end of the Erie Canal along the Hudson River, was a thriving city, Mrs. Lovett traveled to New York City to buy her goods. It was 1851, and she could board a ship down the river or ride the brand new Hudson River Railroad from Troy to Manhattan’s West Side. Maybe the trip was also a quest for fashion, an opportunity to see the newest styles and bring back what she needed to copy them. 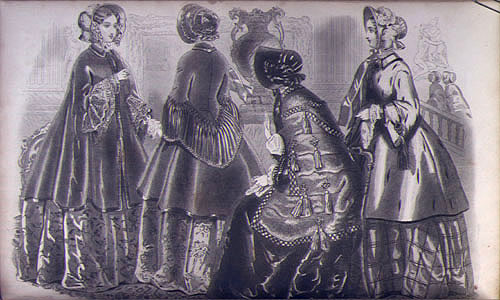 What began as creative economic activity by Mrs. Lovett crashed into the legal walls erected around every married woman in New York State–and most other states. When Mrs. Lovett returned to Troy, the millinery goods that she acquired “on her own credit” were seized by Abram Witbeck, sheriff of Rensselaer County, to settle a judgment against her husband. With the sheriff’s help, her goods paid off a Mr. Robinson to whom S. Porter Lovett, Jr., owed $402.80.

The Lovetts sued the sheriff and Robinson for wrongful taking of property. It is from the opinion in their case delivered by the New York State Supreme Court that we learn their story. The opinion, written by Justice John Willard, also spells out the stark terms governing property within marriage. Justice Willard wrote,

That the legal title to the goods after the purchase by the wife, became vested in the husband, and was thus amenable to the execution under which they were taken.

In other words, Mrs. Lovett never did own the supplies she purchased to earn a living. Lest there be any confusion, the court rephrased the fact: if a married woman purchases goods, the goods become the property of her husband “at the moment of the purchase.” 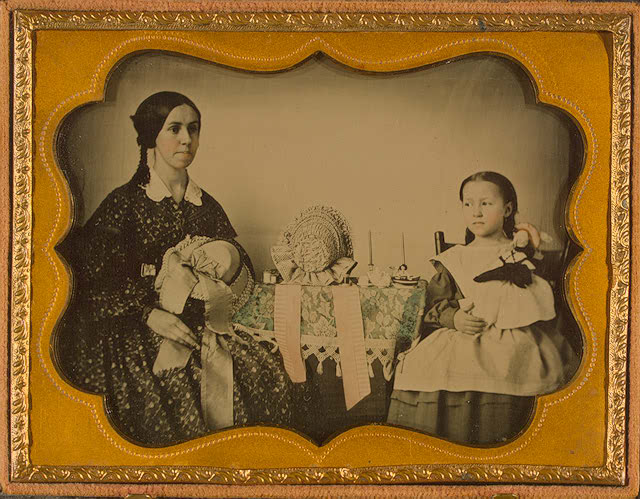 The wife’s legal disadvantage arose from common law definitions of marriage that migrated from England to early America. Marriage erased a woman’s legal identity, and without that identity she could not own anything, including herself. In the famous passage by William Blackstone, an English jurist whose Commentaries on the Laws of England shaped American law:

By marriage, the husband and wife are one person in law: that is, the very being or legal existence of the woman is suspended during the marriage, or at least is incorporated and consolidated into that of the husband; under whose wing, protection, and cover, she performs everything.

So the court reminded the Lovetts,

the husband, upon the marriage, becomes entitled to all the goods and chattels of the wife, and to all sums of money which she earns by her skill or labor; and these he has absolutely in his own right, and not in hers.

In an example favored by Susan B. Anthony when she lectured on women’s rights, a married woman did not own the false teeth in her own mouth. 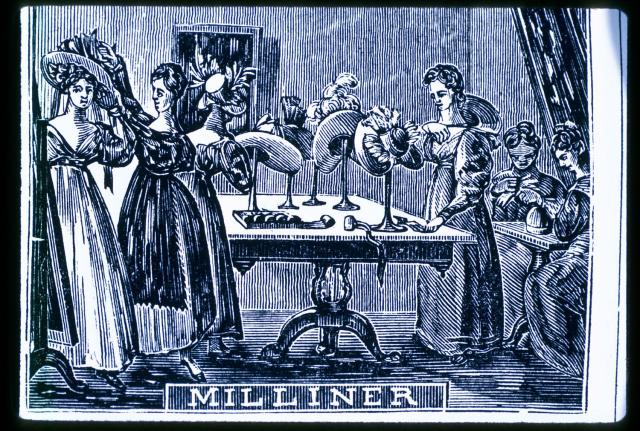 Little attention has been paid to the variety of baneful effects this law of marriage had on families at every economic level. To modern ears, “married women’s property rights” sounds like a problem affecting the wives of landed gentlemen or other privileged couples. But in fact, even a married woman’s wages of labor were not her own. In the Lovetts’ case, the law disadvantaged husband and wife together: in seizing the raw materials with which presumably Mrs. Lovett could have earned a profit, the sheriff increased the husband’s debt.

By 1851, activists in New York State had opened a public conversation about how and why to change the laws affecting married woman’s property. The legislature enacted minor changes in 1848 and 1849 that allowed married women to possess property as their own under specific circumstances. The Lovetts had heard that conversation and recognized in it their own predicament. When they sued for wrongful taking of property, they argued that the new laws protected Mrs. Lovett’s millinery supplies, safe from seizure for her husband’s debts. There is no record of how an attorney built that argument; all that survives is Justice Willard’s dismissal of it. As he read the new law, a wife could possess her own property only if it came to her as a gift or bequest from someone other than her husband. Of Mrs. Lovett, Willard wrote,

The difficulty which the plaintiff has to encounter is, the goods in question did not come to her by inheritance, devise or gift.

I learned about this case and legal opinion from Elizabeth Cady Stanton, who cited it in a speech she gave in 1854 about the laws of New York. To Stanton, already at the forefront of 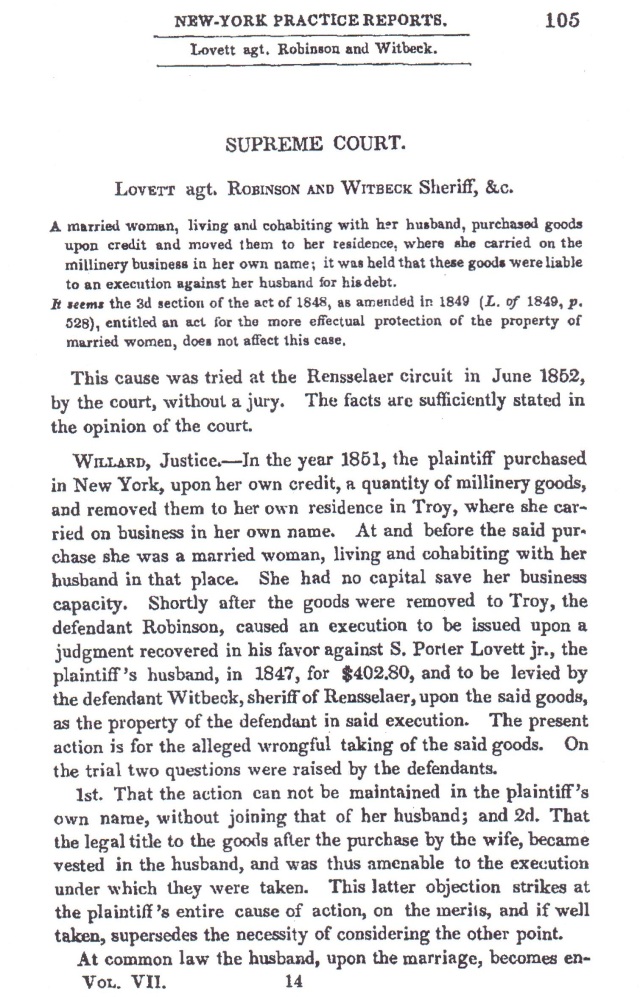 First page of opinion in Lovett v. Robinson and Witbeck (1852)

campaigns to rewrite New York’s laws, the ruling against Mrs. Lovett demonstrated that legislators in 1848 and 1849 had expanded married woman’s property rights only for women of privilege. Without an inheritance, Mrs. Lovett had gained nothing at all by new legislation. By suing for wrongful taking of property, however, Mrs. Lovett proved the point Elizabeth Cady Stanton hoped to impress upon legislators: women were not choosing to give up control of their wages or their business talent; they had not consented to such laws. Mrs. Lovett needed and wanted change.

Who was this married couple with the vision to make a claim that could have pushed the boundaries of the law? Curiously, nothing is known about them except the husband’s name, S. Porter Lovett, Jr. Mrs. Lovett’s given name appears nowhere in the court’s opinion. Working from his name, I think I have identified them; their story can be tentatively told. According to the federal census of 1850, Porter Lovett, merchant, and his wife, Susan, both born in Massachusetts, boarded at a house in Troy’s Third Ward. By 1860, two people of the right age, born in Massachusetts, and listed as S. P. Lovett lived in New York City. Again, they boarded. On this occasion, the census taker found them with a fourteen-year old son. When Samuel Porter Lovett, Jr., died in New York in 1861, his body was taken to Beverly, Massachusetts, for burial near his parents. Mrs. Lovett kept at her work in the city: S. P. Lovett, milliner, later Susan P. Lovett, milliner, doing business at 753 Broadway, appears in city directories late into the 1870s. On the marriage certificate of her son, Edward C. Lovett, in 1875, her name is given as Susan Palmer Lovett. When Mrs. Lovett died in 1901, she was buried in Beverly’s Central Cemetery next to her husband. Perhaps we might sing forth the honour of her name. 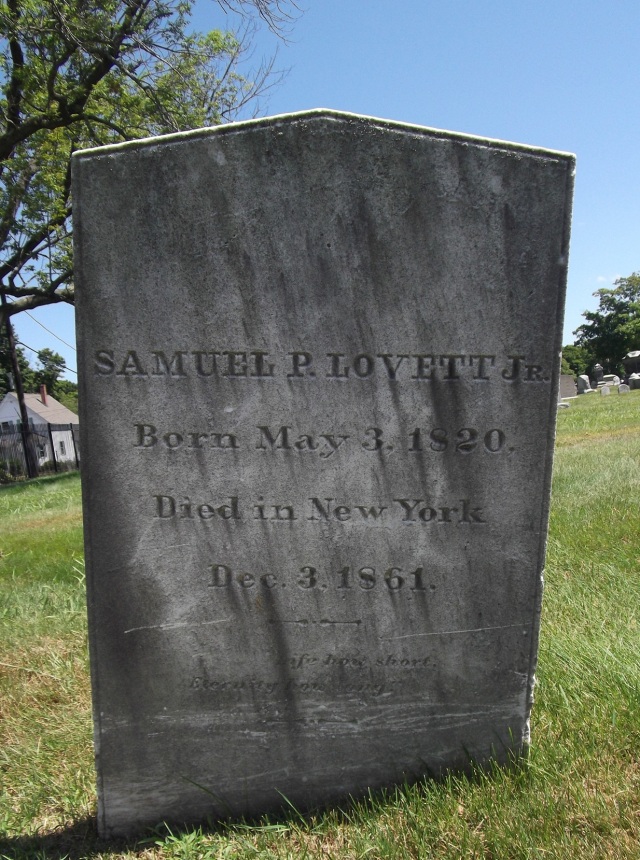 Title quotation from William Shakespeare, Taming of the Shrew and used by Stanton in her speech of 1854.